On Thursday, August 31, 2017, I was bicycling up 8th Avenue in Manhattan. 8th Avenue has a protected bicycle lane, separated from traffic by a row of parked cars. Having been hit by a car door before and having woken up in the hospital, I appreciate having this protected lane.

But after I passed 26th Street, I was forced to stop my bicycle, and walk it onto the sidewalk. The entirety of the protected bicycle lane was taken up by a semi truck. A McDonald's semi truck.

I took some pictures. 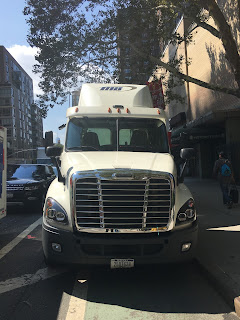 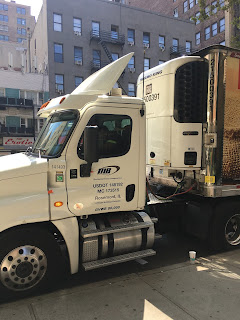 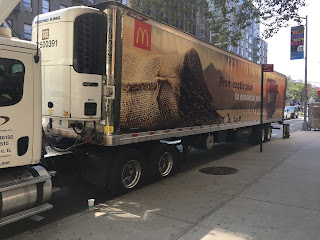 And it was blocking a fire hydrant, while we're at it.

Having a semi truck in a protected bicycle lane is a hazard to bicyclists, and of course, illegal, a violation of RCNY Title 34, § 4-08(e)(9).

As I was about to leave, the driver entered the semi truck and proceeded to drive away, in the protected bicycle lane.

So I tweeted about it, and tagged McDonald's. They asked me to call an 800 number. I did.

I waited and pressed various numbers, and eventually got to talk to Luciano. He asked me what happened, and I described it. He said he'd bring it up with the "owners", and was about to hang up on me when I asked if he even cared enough to take down the license number and other identifying details. I gave him the details.

And that's all. I witnessed a McDonald's semi truck wildly violating the law and putting the lives of bicyclists in danger, and I have an apology from a call center employee who is super sorry and assures me that he understands how upset I am.
Posted by Avi at 4:52 PM No comments: