If your 35HD has not yet failed, please read my other post about important maintenance procedures you need to do while it’s still working. Once you’ve done these procedures, then come back and learn more about the inner workings of the 35HD.

If your 35HD boots to a white touchscreen, what is likely the issue is that the CMOS battery has failed. Without valid CMOS contents, the computer inside the 35HD is paused after booting, waiting for you to use a keyboard to reset the CMOS state. Here’s how to handle it.

What you will need:

To start, remove the computer module from the projector, move it to a desk, and remove the top cover. While you have the module removed, image the CF card. Directions are on the other post.
You need to gain access to the motherboard, and to do that you will need to get the screen out of the way. Completely disconnecting it is too much of a pain, but you should be able to disconnect enough wires to make it mobile.
Step 1: Remove the Orinoco Wifi card. Carefully unplug the antenna from the card, and then (optionally) use a thin device to press the eject button to get the card out. If you gently pull the card straight out without using the eject lever, that’s fine.
Step 2: Remove the two RJ-45 plugs and the serial connection. The RJ-45s easily unplug from the rear of the sockets. The serial connection plugs into an IDC socket on the motherboard, but the plug isn’t keyed. It would probably be a good idea to mark the socket and plug so you reinsert it correctly. (We used a grease pencil that was lying around.)
Step 3: Unplug the power to the LCD backlight: 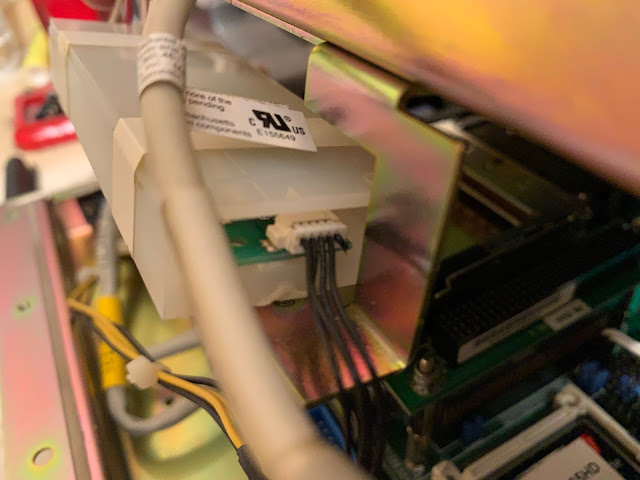 Step 4: Undo four screws holding the LCD on. Warning! There are four tiny standoffs made of white plastic that are above the metal plate that holds the LCD. If you tilt the plate with the LCD on it, you will shake those standoffs loose. That’s probably not the best idea. Remove the screws and slowly and gently twist the LCD out of the way. 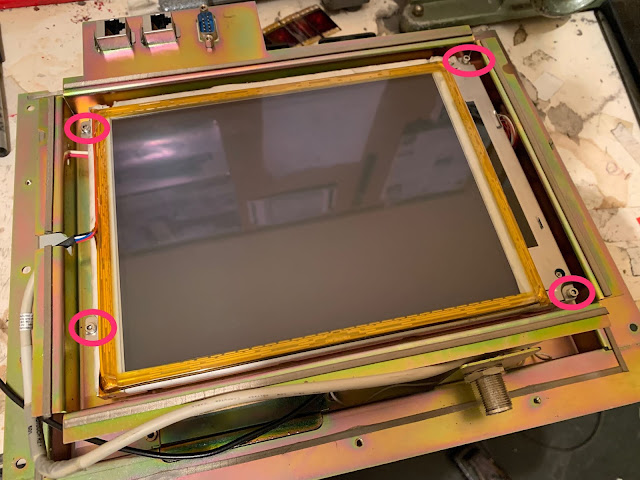 Step 5: Plug in the keyboard. You’ll find a PS/2-style keyboard connector near the RJ-45 jacks on the motherboard. This will be in the lower-left of the motherboard, as it was oriented originally while installed on the projector. The keyboard port will likely be blocked by one of the large standoffs. You can carefully unscrew the standoff, and that will allow you to reinstall it later. 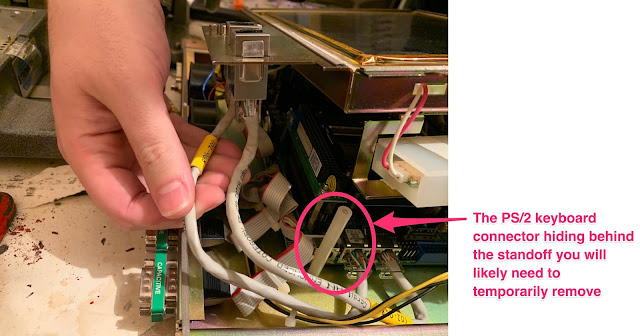 Step 6: Install a VGA adapter. I wish I had pictures of this pin header on the motherboard, but I failed to capture it. 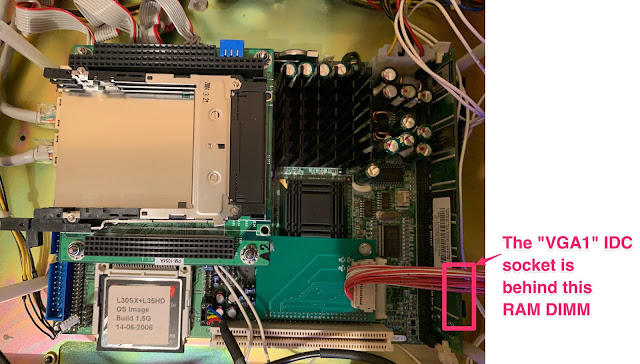 In the very corner of the motherboard is a pin header labeled “TV1”. Right next to it is an IDC-10 socket labeled “VGA1”. If you have the time to create a custom cable, that’s preferred. If not, then use whatever random collection of jumper wires you have available to make the connection. (We used female to female jumper wires from the IDC socket, we wire-wrapped directly onto the pins of a VGA cable, and just bodged the wires together in the middle. That’s not really preferred, but you do you.)

Step 7: Put in the new CMOS battery.
Step 8: Reassemble the computer as best you can. Note: You are missing a large standoff from near the PS/2 keyboard port, which means that you cannot reinstall that screw, but that also means that you will need to carefully remove and save the small corresponding standoff from the LCD tray.
Step 9: Return the computer module to the projector. You don’t need to screw it on, but you need to gently rest it vertically, and attach at least the two top connectors. Attach your monitor. Power on the projector. Cross your fingers. The projector will power up, and the computer will boot. The computer will drive the monitor, and show you a screen. Press F1 to go into setup: 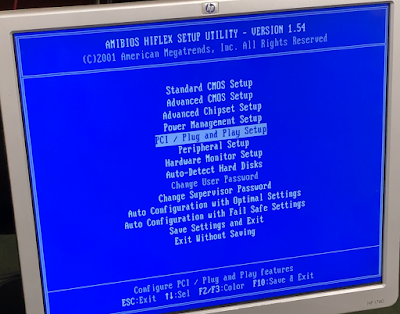 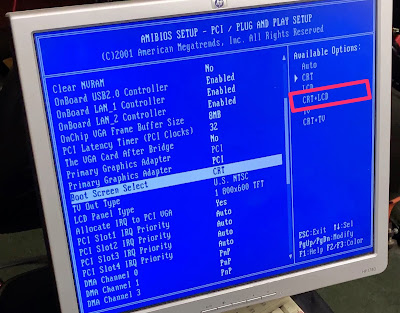 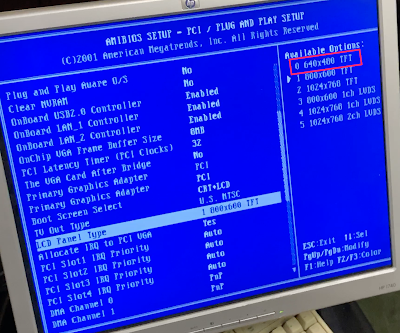 Step 11: Your projector should boot up and use the touchscreen. If you didn’t plug in all the cables, you’ll get some various warnings. That’s fine. Just verify that the touch screen shows an image and that its touch capability works.

You’re done; enjoy the use of your projector again! Make sure that every three years or so, you replace the 2032 CMOS battery. No reason to have to do that again.
Posted by Avi at 8:21 PM